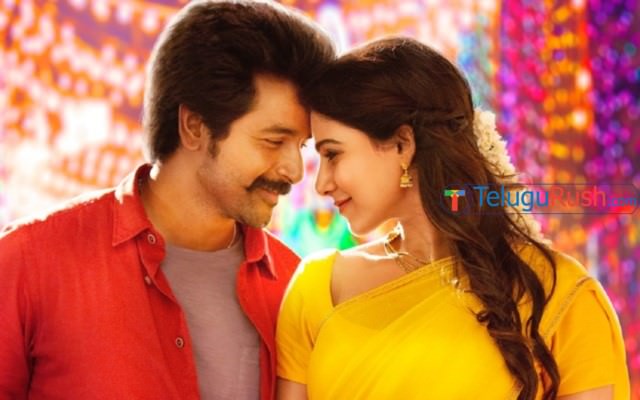 A flower seller, Kaleeshwari (Simran) flirts with a butcher, Krishnayya (Lal), in the market. Krishnayya is a married guy with a daughter who decides to divorce his wife. The King of Simhadripuram, Raju (Napolean) intervenes and tries to convince Krishnayya. However, Krishnayya’s wife commits suicide and within a week, he marries Kaleeshwari. Raju orders them not to enter the market which angers Krishnayya. He creates a rift between the two villages Simhadripuram and Pulivendula which results in a permanent closure of the market. Krishnayya becomes a millionaire by investing in wind mills and wants to take revenge over Raju.

An irresponsible youngster and the prince of Simhadripuram, Seema Raja (Sivakarthikeyan), falls in love with Lakshmi (Samantha). She happens to be the daughter of Krishnayya. Seema Raja has to unite the two villages in order to marry her. Meanwhile, Krishnayya starts creating troubles for him. The rest of the story is about how Seema Raja realizes his responsibilities and marries Lakshmi.

Seema Raja is a combination of regular Srinu Vaitla style script with that of Baahubali. While the makers try to present it with a grandeur, the central theme is weak. The film took inspiration from over 5-6 films which is evident throughout the runtime. However, some comedy scenes and the chemistry between the lead pair are engaging. The VFX work in second half is impressive. The major problem with the script is that it lacks a direction. While the audience wait for something to happen, the film wanders around a central romance track.

Simran is decent in her role but her role is half-baked. The conflict between the hero and villain is not properly established. There are too many irrelevant subtracks that hinder the progress of the main plot. While the film tries to do a lot, it lacks a soul. Even after so much glorification, it remains a popcorn entertainer.

Sivakarthikeyan has very good screen presence and comedy timing. However, he is average during action scenes. Samantha is an asset to the film and she justifies her role. Keerthy Suresh has a cameo and she is impressive. Soori has a lengthy role and he does routine comedy. Simran has a strong but limited role. She delivers very good performance. However, the obsession for negative female characters in Tamil films became repetitive. Almost all such characters appear similar and give a déjà vu feeling.

Seema Raja has an average script. The film developed solely on screenplay and there are several extremely routine elements. The dialogues and dubbing are above average. The production values are extraordinary. The cinematography is excellent and engages the audience with captivating visuals. The music and background score are below average. The editing is a mess and destroyed the flow of the film. The flashback of Simran could have been placed at the beginning of the film as it is a repetitive motif. The VFX work is commendable and they have achieved so much within a limited budget. The direction is above average with a scope of improvement.

Seema Raja is a regular commercial entertainer with an average script. The film lacks seriousness in storytelling. Fortunately, there is not much Tamil nativity in the film. The audience who like regular commercial films can watch it.