Assistant Commissioner Jhansi (Jyothika) is all set to leave for a vacation with her family. She cancels her vacation and starts investigating the rape case of a minor girl (Ivana) as she gets a lead. The accused, Gaali Raju (G. V. Prakash Kumar), is a roadside worker who is also a minor. The girl is impregnated and the couple says that they are lovers and everything happened with her consent. Jhansi keeps investigating the case despite the report. What she finds during the investigation and what happened to the couple form the rest of the story.

The premise is interesting and the suspense elements are well executed. The first half is good and the love story is beautifully showcased. The chemistry between the couple helped the film to a great extent. The interval twist raises many questions and the suspense is established. The second half goes haywire without following a pattern or sequence. Everything seems obvious and there is not much thought put into the development. The climax seems to be abrupt like any other film of Bala. But the short runtime helped the film get over several issues. The film has a 1 hour 40 minutes runtime which is almost half of several recent Telugu films. Overall, it’s a bitter and grounded story of ordinary people.

Jyothika is superb in her role as a rude and arrogant police officer. It is the first time she has done such a film in her career but she is convincing in her character. The body language and expressions make it seem like a tailormade film for her. G. V. Prakash Kumar is believable in his role. His makeup and costumes brought the originality required for the character. Ivana is perfect in her role with her eyes conveying most of the emotions. She is impressive as a housemaid and a teenage mother.

Jhansi has a good story but not up to the mark narration. The dialogues are realistic. The dubbing is bad and is at times loud. The art design and production values are top-notch. All locations are convincing and realistic. The cinematography elevates the tone and mood of the film. The background score is decent but could have been better. Editing is good for such a short runtime. The direction is superb and Bala manages to maintain the balance throughout the film.

Jhansi is a dark-themed film that deals with many social problems and the lifestyle of poor people. The film is full of Tamil nativity which may not appeal to a regular audience. It’s a hard-hitting realistic film with serious drama. The audience who like realistic films and are not bothered by Tamil flavor can watch it. 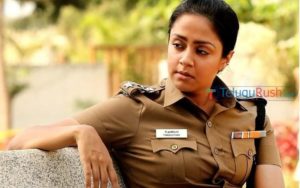 Telugu Rush is an entertainment website with primary focus on Telugu film reviews and analysis. In addition, we also provide English to Telugu translations, informational content on health and fitness, methods to make money online, and general knowledge in Telugu.